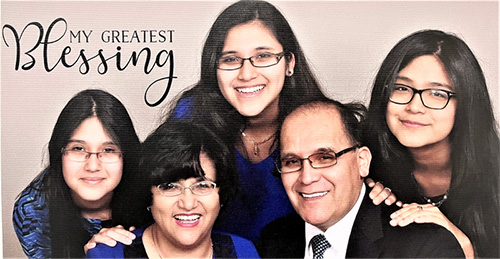 From Starting Over to Woman of the Year

Imagine how proud Dr. Leticia Alvarez Guitterez was to learn that her mentee, Luz Gamarra, ECS PhD Candidate, was awarded the  "USA Today's Woman of the Year Award -- Utah."  Luz's accomplishment and long journey from Peru, where she worked as a prosecutor, to the United States in 2005 were recently featured in the "The City Journals," a local South Jordan newspaper.

Luz and her husband, Javier Gamarra, were forced to leave Peru because one of their daughters needed critical medical care that was unavailable in their home country. Leaving behind everything and everyone they knew and loved, Luz and her family traveled to Utah to save their daughter's life. It wasn't easy to leave behind the successful and comfortable lives they'd built, but  15 years on and Luz is a PhD candidate in the Department of Education, Culture and Society and works as  the Lead Academic Advisor for Humanities and ESL students at Salt Lake Community College (SLCC). Luz has established several peer mentoring programs to support students. Her numerous accomplishments, incredible story along with her passion, dedication, and hard work had the SLCC faculty and staff nominate her for "USA Today's Woman of the Year Award." Luz was selected as Utah's recipient of the award, but there's more to her story yet.

Elizabeth, Luz's oldest daughter, inherited her mother's love of learning along with her work ethic. Elizabeth was already a Fulbright Scholar and Oxford Consortium Fellowship recipient when SLCC nominated her for their inaugural "Rising Star Award." Kate Rubalcava, CEO of Utah Nonprofits Association and a member of SLCC’s Alumni Leadership Council Rubalcava, said that the ". . . award . . . uplift[s] recent SLCC graduates and highlight[s] their commitment to community and to their professional and personal growth. Elizabeth’s nomination stood out as someone who was not only exceptional in her professional accomplishments, but who at her core, is an inspiring leader.”

Starting over wasn't easy for the Gamarra family, but they've done more than make the best of it--they've turned their intellectual curiosity and love of learning and service-oriented passions and used them to create pathways for others, and that's the most significant award of all.